In 2015 ASPECT (the Association for Service Providers of Employability and Career Training) had reached an impressive milestone – 25 years of serving community based trainers in British Columbia. But their own success had placed them on a precarious position – they had been successful in advocating on behalf of their agency members – so much so that they did not have to manage contracts on their behalf but that meant a loss of income. In order to reframe their value to the members, as well as the entire sector and the decision makers and government leaders, ASPECT needed to tell their story in a more compelling fashion.

The website was not doing that. The ASPECT website was not functioning effectively and there was no formal content strategy in place to get the message out that ASPECT was still a powerful voice representing community based training agencies in the province.

In less than three months a brand new WordPress site for the organization launched with up to date information, engaging stories about the people who contributed to ASPECT  over the years, and a vision for what was coming next. A detailed content strategy including guidelines for logo use and voice and tone was written and communicated to staff and subject matter experts. 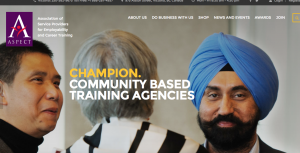 For the first time – the awards program was fleshed out – not just posting an entry form but sharing the story behind the awards – the people who inspired the program and those who were celebrated.

Instead of poor quality stock photos – high quality images of actual ASPECT members were retrieved and used to visually reinforce the value of membership and involvement.