The Power of Public Consultation 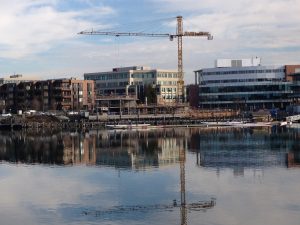 Why public consultation must be project plan essential

Riddle time – what is invisible and often ignored but once poked becomes incredibly noisy and has the power to crush a project into dust and crumpled blueprints? Hibernating bear is a good response but the answer is your stakeholders and the public who want to know the impact of your construction project on their lives.

The public, your public, and you don’t have a choice in the matter, will make you their focus. Especially if they think your work will change their world.

On a formal level, the core rationale behind the consultation process in any scenario is to identify issues, concerns and potential public resistance before work on a construction project begins.

According to a European school of environmental management (see link in references), the benefits of public participation are many and often depend on the project impact potential and the affected population. These are a few items to at least acknowledge early in the planning process:

Sustainability is a growing criterion for projects and is authentic when achieved through the involvement of all stakeholders.

Environmental issues have become an important factor in a project success. In order to manage possible public opposition based on this category it is critical to gauge the public interest and understand why they care.

Although not all conflict situations can be avoided, they are made explicit in the public participation debate. That definition of scenarios and responses can help make the management process more efficient.

Mitigate the Risk of Public Opposition

Stakeholders need to have a sense that their concerns are being listened to and that there are opportunities for them to offer alternatives or solutions – this validation reduces the risk of disruptive opposition.

If the public is involved in the full decision making process, their concerns may be addressed earlier in the planning process when changes could be made with less financial consequences.

Acceptance of the public as a valued partner in the construction process can inspire the co-operation between citizens, their government, and industries that is crucial to the success of a regulatory system. Public participation and consultation is also an opportunity to solicit the “hidden” knowledge of the wider community and their key concerns.

Worth the Price of Conversation

Developers often find themselves facing vocal opposition because they attempted to side step even a minimal consultation. People have a core need to know how they will be affected by anything taking place around them.

The Golden Rule of communications is that when faced with an information vacuum people will fill the space – and not necessarily with correct information.

When a process ensures a transparent and accessible platform for the populations who have a stake in the project (stakeholders) there is a greater likelihood of success. An example of a targeted process is the hearings taking place into Kinder Morgan’s proposed pipeline expansion though Alberta and BC. Under federal rules, those who apply to take part as interveners (to speak at the hearings) must be directly affected by the project or can prove they have relevant information or expertise. Over 2,000 applicants asked to participate in the March 2014 hearings for the $5.4 Billion project. Obviously those people and groups felt a compelling reason to be heard and to have their opinions included in the final decisions

Without stakeholders understanding and support – a major project may languish for years or worse, simply fail to launch.

For smaller projects the project owners should do an environment scan of  stakeholders before setting up communications and consultation events or opportunities. They need to commit to a process that is genuine. What is an environmental scan? Simply put, a scan identifies potential scenarios and the people who need to know how your outcomes will affect them. It could be the local or provincial governments – making sure you follow the mandated processes. It could be neighbourhood residents or businesses. Every person who lives or does business near the project will expect to be heard.

There are also special interest groups to consider – organizations who have built up expertise and understanding in aspects of project impacts. They might be economic, environmental or cultural focused. Work has been halted on a major infrastructure initiative after the discovery of an important archaeological artefact or when a significant habitat threat is identified by such a group.

First Nations communities are increasingly involved in approval processes so building real relationships with them has become an essential success factor for many projects.

Preparing multiple scenarios with local special interest groups in mind before the consultation phase provides an opportunity to have plans in place.

Consultation is a balancing act – the decision might already be made but there is very real value in working participation. Groups and individuals may propose unique solutions or identify unforeseen challenges – the critical element is they must feel that they are being heard.

According to Stephen Watson, BC Hydro Stakeholder Engagement on Vancouver Island, the key is to get out early and build relationships, “The two main themes for me in community engagement are no surprises, and to begin and maintain good community relationships. Get out early on a project and then continuing communication until project completion. Whether that’s community meetings, email, phone calls, construction reports, news releases, social media or all the above, keep people informed. People may in the end agree to disagree, but at least they will know what’s happening and that’s always appreciated. Relationships are critical, whether at work or in your personal life. Two-way communication, and making the majority of your side listening, will result in good outcomes.”

Levels of public trust have changed. There was a time when development organizations could expect a default level of respect and trust even if they were not well known by stakeholders.

Reputation used to have weight.

That situation no longer exists. Road shows, town hall meetings, online forums, community presentations and site tours must be more than window dressing. Social media is another channel for real time public input. Although it can be monitored, never controlled. One example of a public consultation launched with enthusiastic support but which deteriorated to the point it was detrimental to the project was a recent engagement campaign on a major transportation change (BC Ferries 2014). Unfortunately, the final perception was negative because many stakeholders felt project owners had never been interested in their voices, only the appearance of authentic consultation. In these circumstances the act of public consultation merely reinforced frustration and increased the risk of resistance.

A truly powerful communications tool when used expertly, public consultation can solve issues before they stop a project. The genuine act of inviting stakeholders to step forward is the professional and in some cases, the required process to manage a project from idea to successful completion.

“Public consultation is not just about your project, it’s about how people feel about you and your company in the community, and what you stand for.”    Stephen Watson, BC Hydro 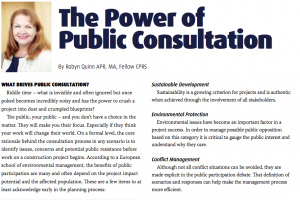